skip to main | skip to sidebar

Listen to me and I will tell you the story of the Kitchen Wall, as it was told in the days of old.

So, here's the story of my kitchen wall. No! Do not click on to another more interesting blog, stay with me and listen to the story as it was told in the days of old. You may want to get yourself another coffee at this point. In some ways the story of the kitchen wall is a story of romance and folly, a story of family, loyalty and growing maturity. In other ways it is just a story about a woman who paints her kitchen wall. I'll let you decide. 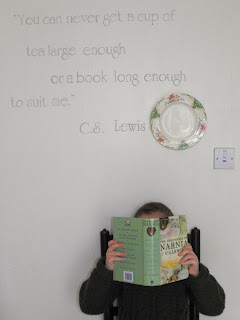 So it all starts twelve years ago when we first move into our house. We strip the wallpaper off the kitchen wall, remove the dado, line the walls with lining paper and paint them cream. Oh, but the folly of youth will out - we decide that we cannot bear (yes, gentle reader, cannot bear) the look of normal kitchen paint with its practical wipeable sheen. Normal kitchen paint is too Daily Mail, Fosse Park at the weekend and Early Bird and the Harvester. The general consensus between myself and the DH is that if we cannot paint our kitchen in ultra matte, chalky, Farrow and Ball then we might as well never bothered getting a degree, buying the Guardian and reading books about the Fabian Society. 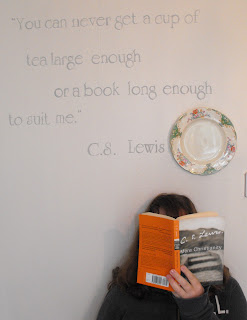 So we slap the Farrow and Ball on the kitchen wall, then we slap it on again, then once more because it doesn't cover very well and stand back and admire our work...and we are very careful with the kitchen, very neat and tidy, for all of say ten whole days. Then things start to get bad. The DH has a terrible habit of not looking at the bin when he's getting ridding of the scraps before he does his nightly stint of washing up and soon there are splatters of gravy and tea on the cream Farrow and Ball framing the bin like a Jackson Pollock or an IRA dirty protest. But never fear - I get out the remains of the paint and go over the splatters with a spot of paint ... on a weekly basis for...eleven years. However eventually the DIY shop in my town closes down and I don't think the accursed Farrow and Ball do the colour of my paint any more and the kitchen wall gets dirtier and dirtier until I am thoroughly ashamed.

My mother begins to question me about the kitchen wall - why is it so dirty? Why can't the DH manage to get anything in the bin? Why haven't I cleaned the kitchen wall? And then, when I'm ill in bed, she decides to clean it for me and sprays the whole wall with kitchen cleaner which simply gets absorbed into the uber middle class chalky finish, leaving little permanent spray splatters to join the chicken fat, gravy and jam already adorning my kitchen. My mum is furious, "why didn't you paint your kitchen in kitchen paint? Are you a mental person? I thought I'd brought you up better than that! Why has it been so clean all these years if the paint isn't wipeable?"

I explain to her gently that I've been quietly painting over the DH's splatters for eleven years, but now I've run out of paint. I think she is going to kill me but instead she just calls me a "bloody fool" and I agree with her.

So out I go and purchase a large tin of cream kitchen paint from Homebase. I paint the whole of the kitchen on a Monday when the DH is at work and the kids are at school and nobody notices my handy work, except my mother.  She comes in all smiles and we sit at the kitchen table and have a coffee. She is very pleased with me and I am very pleased because I have pleased my mummy. I then say to her, "you know, I'm thinking of painting a motto or quotation on the wall - like they did in gastropubs ten years ago." She thinks this is a splendid idea and looks over to the line of bookshelves on the other kitchen wall and says I should find something from Shakespeare and I say that I shall think about it.

So I make a unilateral decision and paint a C.S. Lewis quotation on the wall.

The little one is thrilled and as soon as I'm finished grabs the family copy of Narnia and orders me to take a photo of her underneath the quote. She makes her big sister do the same with Mere Christianity. It is not until I download the photos of the kids onto my laptop that I realise I have painted the quotation slightly on the wonk. Somehow this represents the story of my family life, so I leave it as it is and smile.
From Brain to Blog by Dulce Domum at 03:56

You can get special kitchen paint? Why don't I know this?

And there was me thinking it was the PHOTO ever so slightly on the wonk!

We painted out lounge & hall in a great shade of homebase-sale-knockdown -price- pale-blue [and still had enough left for a bedroom] and my SIL said "This is lovely, is it Farrow and Ball??"

Love the wall, love the quote. It never occurred to me to put quotes on the wall--a splendid idea! As it is, I just type out my favorite quotes and poems and stick them to the wall with painter's tape. Yours looks nicer.

A most distracting...nay enchanting story my dearest Dulce Do. Made me chuckle somewhat...especially the suggestion to paint Kinder, Kuche, Kirke, hahaha lol.

I will now regale you of our kitchen wall disaster...I had middle/higher middle-class aspirations for my kitchen and bought posh wallpaper...none of your B&Q common rubbish for us. However, being from working class/lower-middle background I've always just pasted the paper onto the wall.

One must soak the paper first in water when one is using posh paper otherwise it will curl mightily at the edges, then you will try to glue down the curled edges with copious glue which get covered in cat hair (which floats here and there in our house) thus creating a delightful effect.

Oh well. I now have some splendid B&Q paper up and it doesn't curl at the edges! Hurrah!

I haven't read such a good story in a long time. I love laughing. But if it had been my wall, I would not have laughed or let it turn into a funny and wise tale -- mostly because I never had much paintable surface in my kitchen...You are a trooper and a patient homemaker. The quote could not be more perfect. So happy for you and your clean cream kitchen.

"I don't think Nazi slogans will create the appropriate warm and convivial atmosphere I require in my kitchen diner."

This made me LOL in a very undignified way (at work).

You've made me smile too

I loved reading this! :)

You've got more of what it takes than do I...eleven years you painted over the splatters?! Good grief! I'm not sure I would have done it one year. Your header photo is fabulous and love the Lewis quote...makes me think maybe I should write on my own walls! smile.

This was a fun read! It was nice to visit your blog.

Ah yes, the aspirations to elegance that one has for - ooh - several days at a time... I recognise them. We've just had our study repainted. Currently it's pristine white and empty. We are going to have a purge of the Stuff that was in it, and never let it get cluttered again.

Hilarious story and a good quote too. I like the kids reading under it.

I'm a little late reading this, but I enjoyed it very much. I especially recognize the mother/adult child dynamics that take place in this story. I'm afraid some of the particularly British references are lost on me, but they sound wonderfully cozy all the same!

And yes, I think you chose the right quote, wonky or not ;-)

Gretchen got me over here to read this story and I am glad she did.

For the Homespun Revolutionary

Let's Go Living in the Past

It's Good to Talk

If you would like any of the recipes featured on my blog I am happy to send them to you.
My email is:
breadandrosesrecipesATgooglemailDOTcom

Women know
The way to rear up children, (to be just,)
They know a simple, merry, tender knack
Of tying sashes, fitting baby-shoes,
And stringing pretty words that make no sense,
And kissing full sense into empty words;
Which things are corals to cut life upon,
Although such trifles: children learn by such,
Love's holy earnest in a pretty play,
And get not over-early solemnised,–
But seeing, as in a rose-bush, Love's Divine,
Which burns and hurts not,–not a single bloom,–
Become aware and unafraid of Love.
Such good do mothers